I’m working on a project to create a ‘Cowal Tweed’ which will be used in the revamped Burgh Hall for upholstery and furnishings.  It’s being designed by local residents and an artist and then to be woven by me.  It’s the first time I’ve been involved in something like this and I’m really enjoying it.

I was invited down to Dunoon to give a wee talk on Harris Tweed and then to participate in a workshop to finalise the design and pattern.  As part of the talk, Sgioba Luaidh Inbhir Chluaidh came and did a waulking demonstration which was fantastic!  I hadn’t seen waulking for many years and the ladies did a sterling job.

Here’s a wee video I took 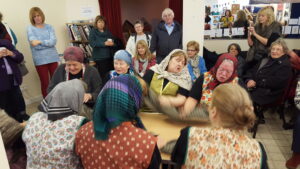 and then rolling it up after measuring and making sure it was finished to the desired width. 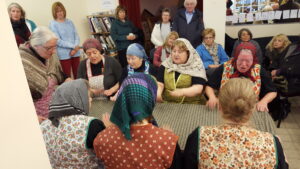 After they’d finished their demonstration, it was my turn!  So, knees knocking, hands trembling and voice quivering, I started talking…and then took quite some time to stop!  The audience were fabulous and we had a great question and answer session once I finally drew breath!  Everyone was really nice and there was plenty of tea on the go so I had a fantastic day!

Here’s a couple of photos taken during my talk. 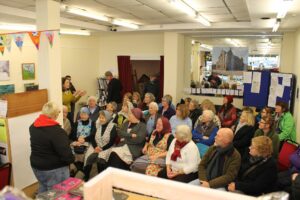 A massive thank you to everyone who came along, to the people involved in the refurbishment of the Burgh Hall and to the ladies of Sgioba Luaidh Inbhir Chluaidh!

Watch this space for more information on the ‘Cowal Tweed’.